Recently I’ve been reading a novel set during the time of the Fall of Singapore. Now to be honest it is not something I knew very much about so I’ve been trying to educate myself a bit on the subject. You can read more about it here.

I remembered a story I’d heard when I was younger about my uncle being a prisoner of the Japanese during the war. As a child I didn’t ask much about it and I certainly never spoke to my uncle about it. I am often frustrated about the opportunities missed to ask about the past.

The uncle in question was my Uncle Gerry, the husband of my Mum’s sister, Cathy. His full name was James Gerard Burns and he was born in Newmains in 1920. His parents were John Burns and Rose Donnachie.

I’ve now read some survivor accounts of their time in captivity which tell of the horrendous conditions of the camps and the cruelty of their captors. I can hardly believe that someone I knew lived through such horrors.

I discovered the document below which shows that James Gerard Burns (the middle name on the card is wrong) was captured in Singapore on 17 February 1942. For three and a half years he survived on meagre rations of less than a cup of rice per day. The prisoners suffered malnutrition and disease was rife. They were forced to work as slave labour for the Japanese who would randomly beat and torture their captives.

A quarter of the prisoners did not survive. It must have taken incredible strength and bravery to keep going all that time but Gerry did survive and he returned to Newmains where he married my aunt Catherine Brawley on 4 January 1947. Gerry and Cathy were married for 53 years until his death on 13 September 2000. 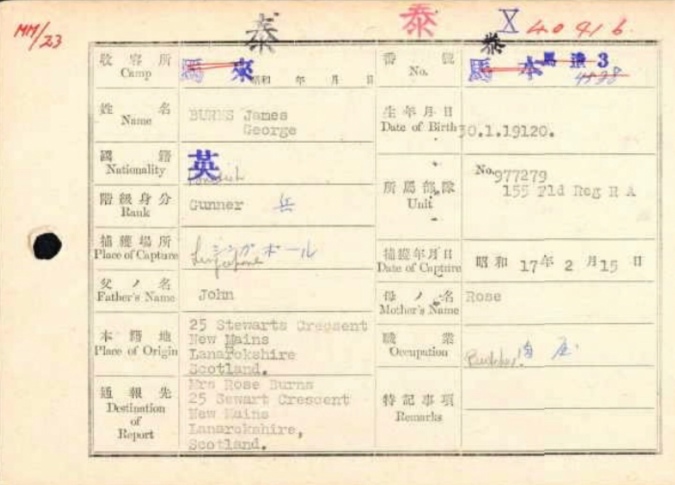